1. Kids stop going when their parents are slack in their church attendance

2. Kids stop coming when their parents don’t pastor their own children

Wonderful wisdom here for being a Christian family. They should polish this up into a tract:

Ten tips for going to church with your family | Parenting | Growing Faith.

I’ve been listening to these excellent talks from the ever reliable and useful Proclamation Trust.

Dick Lucas’ reflections on 2 Peter were great. Whenever he makes observations on theology and church life we ought to sit up and listen. He notes that Richard Backham has written that form criticism is academically defunct, and Lucas sagely comments on what a waste of a hundred years of scholarship, essay writing and lecturing has gone into liberal form criticism.

What was really interesting were two talks on raising children in ministry households by Charles and Tricia Marnham:

Another journey through the Lord of the Rings. Still amazing and lifegiving. Also loved reading the Hobbit to the kids.

I finished reading my way through all the Sherlock Holmes books by Sir Arthur Conan Doyle.

I read a one volume collection of the stories of Flannery O’Connor. Including ‘Wise Blood’ and ‘A Good Man is Hard to Find’.

Gilead was an enjoyable read. I love father-son stories.

Bp Glenn Davies gave a seminar at HTD recently on a biblical theology of parenting and a covenantal understanding of raising Christian children.

This is great material I commend it to you – especially if you want to hear a robust defence of baptising babies and a Christian view of households:

We announced yesterday that I am being appointed Priest-in-Charge at Berwick Anglican Church.

This is huge and exciting news. We are so sad to be leaving the saints at Holy Trinity and the wonderful staff team.

It looks like all of Douglas Wilson’s Canon Press published books are ‘full view’ on Google Books.

Well worth an online read, you’ll end up buying some of them!

The Paideia of God and Other Essays on Education

Angels in the Architecture – A Protestant Vision for Middle Earth

A Serrated Edge: A Brief Defense of Biblical Satire and Trinitarian Skylarking

I love days off with my beautiful family.

Goodonya Craig. If we want a renewal of Reformation theology, family life is one key area with infant baptism included.

I’m taking my family and a group from HTD on a mission trip tomorrow to the far north west – Port Hedland. We also have an adventure to Broome + other places planned as well. Our goal is to share the good news about Jesus and promote the work of the local Anglican churches. It is also a time of training and spiritual growth for the team members.

Coaching Federer would be the ultimate job for any tennis coach. Yet I think Cahill has made the right decision in rejecting Federer to be with his family.

There are lots of lonely broken men with successful careers out there. Not worth it.

“Roger is a guy who lives in Switzerland and trains in Dubai, and Darren has kind of set up a comfortable life in Vegas. And I think he realised that just being on the road 20-plus weeks would be too tough a go for him with his young family.”

All of my children are doing amazing and creative things at the moment. They are a delight to watch.

Josiah is showing outstanding leadership initiative. On Saturday we held a parenting forum at HTD and he setup the kids creche tables and toys without even being asked. I wasn’t even going to ask him to help. He is also cleaning up stuff and doing filing at home, because he doesn’t like mess – just like me.

Jemima has become a CD junky and is making up little dances and actions to songs. She also has an incredible “in-love-with-Dad” attitude – beautiful.

Lydia is beginning reading. Helen taught her some basic phonics and it is a delight to sit with her and read through the Fitzroy Readers – she is slowly getting it. She has wanted to read for a long time.

CK has just been toilet trained and is growing up overnight into a chatty young lady.

I need to work harder at our family devotions and giving them lots of time and attention. All four are faithful and godly Christian children.

Great gifts from the Lord Jesus Christ, to be raised in Him.

I enjoyed this article and the comments discussion that follows. I’m wrestling hard to build a ministry to equip Christian parenting at Holy Trinity.

Children’s and youth ministry need to be seen as a complement to the family ministry than as a substitute for it.

via Equip parents before the youth group | Mission-minded church | Sydneyanglicans.net.

Survey around the children’s bedroom tonight:

Overall, the enormous increase in the divorce rate and in single-parent households since 1960 seems very likely to have played a major role in the decreasing age of puberty. However, it is not clear precisely why an absent or emotionally unengaged father should trigger earlier puberty.

via Oliver James on whether absent fathers trigger early puberty in girls | Life and style | The Guardian.

For the past 6 months we have enjoyed a whiteboard in our house.

We highly recommend the prices and service of Mr Whiteboards. We got a 1800x1200mm vitreous board. Basically I wanted to get something as good as you would have in a normal classroom or conference room, except it is in our dining room. The boards you would buy at Officeworks are mostly expensive junk. After a year or so they will be full of ugly streaks from pens that don’t rub out perfectly. Kind of like the cheap whiteboards that churches always buy.

The service of Mr Whiteboards was fantastic – we weren’t happy with the mounting, and they came and installed a replacement board which was mounted much more firmly without wobble. I think we even had Mr Whiteboard himself in our house come to install it.

It is a great help with the homeschooling, but we have also enjoyed using it for family devotions, and even the odd family brainstorm. It’s great for making temporary lists, such as “things to do before going on holiday”. It also functions as a intercessions reminder wall.

Now we’re going to have to ask for one in every house we live in.

On holiday we visited two great churches and were deeply encouraged by both.

But they had very different views concerning children of believers.

One church counted children of believers as being Christians themselves. They were part of the whole service and very little was changed for them, except for a kids talk. There was no Sunday school within the service (though there was one beforehand – it wasn’t obvious to us from the church sign whether we could just rock up).

The other church had a separate building and events for the kids – we parted ways even before any services started. From what we saw, the kids-side was essentially an evangelistic meeting with an invitation to “put your hand up if you want to make a decision” prayer at the end. In fact the adult end was a version of this as well.

Theologically I think the first church had the theology right. There is a continuation between the old and new covenant in terms of inclusion of children of believers in salvation. Children of believers are rightly addressed and treated as saints throughout New Testament letters.

But it kind of felt like neither church had the practice right. The second church was much more tailored at the kids level – there was lots of energy and creativity well used. But my kids didn’t need evangelising – they needed to worship/praise God, be taught his Word and get fellowship with other Christians. On the other hand we could have been a pagan family visiting and the second church would have been on the money. 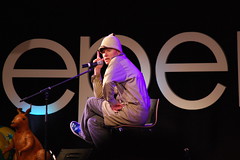 Every year Helen takes the kids and whoever will come to the Colin Buchanan concert.

I missed last year, so it was great being able to go this year.

Colin was fantastic. A great performer, great theology. We bumped into him on the street on the way out and he was very friendly.

The best thing about the concert was seeing so many Christian friends that I haven’t seen for a long time. We must have bumped into 30 people we know! Some of them I had not seen for over 10 years. Wonderful.

This is a stunning essay on the rise and possible fall of secularism in the West. Is the thesis correct though? There are big gaps in either view.

This essay represents what might be called a radical friendly amendment to the revisionists. It questions the theory of secularization and, by extension, its father Nietzsche, not by citing current facts about religious renewal or historical facts about Christianityâ€™s influence, but rather by exploring a hitherto unexamined logical leap in the famous story line. To be fancy about it for a moment, what secularization theory assumes is that religious belief comes ontologically first for people and that it goes on to determine or shape other things they do â€” including such elemental personal decisions as whether they marry and have children or not.10 Implied here is a striking, albeit widely assumed, view of how one social phenenomenon powers another: that religious believers are more likely to produce families because religious belief somehow comes first.

No mp3 of this one, but this is a sermon I preached on “Biblical Foundations for Family Life” at our Mandarin congregation. I’m still working on this material so if you want to see/hear the English version you’ll have to invite me to run a biblical parenting seminar at your church. 🙂

We have just started reading the book of Revelation over our family devotions. One chapter a night from NIV with a running commentary from dad.

Tonight was chapter 2. Verse 10 says: “10 Do not be afraid of what you are about to suffer. I tell you, the devil will put some of you in prison to test you, and you will suffer persecution for ten days. Be faithful, even to the point of death, and I will give you the crown of life.”

Wayne: “If we love Jesus till the end he will give us all a crown of life. Who would like a crown of life?” (shouts from kids) Jemima: “Me” Josiah: “Me” Lydia: “Me” Jemima: “Tiara please”

Helen to Jemima: “We need to drive Jono and Harry home now”

Bye Jono, Harry, Catherine and Charlie – we will miss you guys.

I forgot to add in the previous post, Jemima is only 5 years old! She got her age + 2 in strikes!

I was totally blown away by Jemima not only beating me in Wii bowling but getting 209! She got 7 strikes! And there was much shouting for every one of those. Believe me, Wii bowling is pretty realistic, this is NOT an easy thing to do. Jemima beautifully kept her cool the whole game. I love playing with my kids. 🙂

I am a Christian, husband and father.

I am senior pastor of Berwick Anglican Church, in the south eastern growth corridor of Melbourne